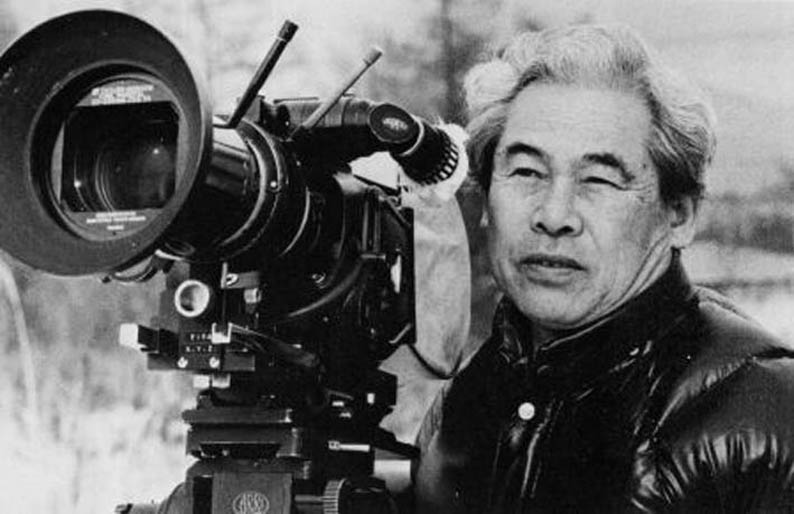 Arguably the most prolific of Japanese directors from the post-studio era, Kaneto Shindô’s career, spanning nearly 6 decades, has been one of the most overlooked. Born on this day in 1911, Shindô’s life, spanning exactly 100 years, has only recently been acknowledged through an expansive retrospective of his work in the United States of America presented by noted actor Benicio Del Toro, as well the release of the posthumously published Life Is Work: Kaneto Shindo and the Art of Directing, Screenwriting, and Living 100 Years Without Regrets, which will be released in October this year.

A pupil of Kenji Mizoguchi, Shindô joined cinema after a brief army stint during the Pacific War. His early scripts with Mizoguchi and Kōzaburō Yoshimura gave him the confidence to direct his first feature, Story of a Beloved Wife, which extended Mizoguchi’s feminist concerns, by looking at wives in traditional Japanese households as individuals. Instead of balancing the social concerns of the times with a balance of melodrama, Shindô depicted a bleak reality expecting the audience to be courageous enough to witness reality as it is, instead of an escape through conventional storytelling.

Shindô was not a Communist, but throughout his work one notices a concern for the working class underlining the unfairness of the class divide. Other than this social concern, his key focus has between the atom bomb, which for him was dropped without warning and never completely addressed by the Japanese or the Americans. His film, Children of the Hiroshima, based on the writings of Osada Arata, represented a testimonial for the hibakusha or survivors of the atom bomb. Interweaving real-life accounts of actual survivors with a fictional protagonist, the film displayed Shindô’s ability to formalize everyday happenings through a cinematographic method. Although Shindô was deeply satisfied when the film was shown to the Americans, the work in itself was unsuccessful due to its excessive sentimentality. The director later tackled the same theme in his film Lucky Dragon No. 5 on a group of fishermen suffer the effects of nuclear radiation caused by the Bikini Atoll hydrogen bomb tests.

Shindô’s first masterpiece Miniature tells the story of Ginko, a poor cobbler’s daughter, becomes a geisha to support her family. Based on the eponymous novel by Shusei Tokuda, Shindô reflected on the pathological elements in post-war society through the figure of the geisha, similar to the approach used by his mentor Mizoguchi. Even though Miniature was just his fourth film, Shindô already had an understanding of film form through emphasizing the physical aspect of the cut with sequences with excessive affect through unusual camera angles and camera movements. Taken a leaf out of Citizen Kane, the film is choreographed such that objects and movements in the foreground of the composition have a logic of their own. The film also established the nature-nurture split, as in all his early work, through having his characters eating for long passages of time. In his early work, the film has a bleak ending often represented by death that unites all the characters.

His next major work titled Ditch explored this pathology in society by exploring a mentally ill protagonist that was forced into prostitution. The film had a number of memorable sequences, which underlined her stint as a sex worker and her interactions with clients. The film seemed like a precursor to Fellini’s Nights of Cabiria and borrowed its aesthetic from De Sica’s Miracle in Milan and the theatrical approach of Bertolt Brecht.

Shindô borrowed the tropes of Hollywood film noir in his next major work Wolf, which recollected the lives of insurance workers who are forced to rob a cash delivery truck. Shindô’s vision of cinema seemed to be one of a mass medium in which depicted the struggles of the characters so that cinema is about life instead of providing an escape from it. His depiction of Japan’s reality has the war as its basis and the disappointment of not being able to win it. The director uses several cinematic devices such as the jagged frontal camera movement to depict the flashback. Most important in Wolf is its structure in which the main event and its setting up are peppered with the concerns of the shomin-geki or social drama. Shindo expertly uses repetition such that the repeated event is simply an elaboration of its original depiction.

The director is best known for his 1960 work Naked Island, which won the Grand Prix at the Moscow Film Festival. Taking a documentary approach to the everyday life of a fishing family on a small island off the coast of Japan, Shindo formalizes the film and reduces it to its minimalist core: image and sound. This creates an extremely austere film aesthetic not very dissimilar to that of Robert Bresson. Although hailed by critics in the West, the film did receive some criticism back home, as some of Shindô’s contemporaries, led by iconoclastic film maker Nagisa Oshima, who felt it fulfilled the vision the West had of Japan.

Shindô’s next two masterpieces Onibaba and Kuroneko used traditional forms of Japanese theatre such as Noh and Kabuki to create “a traditional Japanese ritualistic pattern of a human being vanquishing a demonic threat.” For Onibaba, Shindô, took as his starting point a Shin Buddhist parable in which an old woman is furious with her daughter-in-law for continually neglecting household duties. Shindô unfolds the tense, taut drama in a compelling atmosphere of amoral horror with sex being the only reality. For Shindô, sex was “nothing but the expression of the vitality of man, his urge for survival.” This lust for sex is emphasized by the element of the mask which is worn by the woman who hopes to devour her competitor but is ultimately subsumed myth itself as represented by the mask. Shindô would return to this obsession with female sexuality in his 1972 work The Iron Crown, which intercuts the tale of a contemporary middle aged woman with a Noh play from the Heian era in order to underline the timeless quality to a woman’s jealousy.

Kuroneko on the other hand, was a kaibyō eiga or ‘monstrous cat film’ rooted in Japanese folk stories about vengeful spirits, or onryo, of abused women. Austerely choreographed, the film emphasizes form and craft in spite of its horror genre by emphasizing the Noh genre of Japanese theatre. The film went to Cannes the same year that Francois Truffaut and Jean-Luc Godard protested the dismissal of Henri Langlois of the Cinematheque Francaise, and therefore did not garner any attention. Whilst American audiences were busy catching up with the works of Ozu, Kurosawa and other Japanese film makers, Kuroneko remained an ignored Japanese entry from the ‘60s.

Live Today, Die Tomorrow, Shindô’s realistic noir was the closest to the concerns of Japanese New Wave directors such as Nagisa Oshima and Shohei Imamura as it represented contemporary urban Japanese youth and their struggle for survival. The film consists of off the cuff handheld camera, freeze frames reminiscent of the early works of Jean-Luc Godard, whilst maintaining the classical structure of Japanese studio cinema.

In 1984 Shindô made The Horizon, chronicling the life of a poor farm girl who was sold as a bride to a Japanese American. The film was loosely based on the life of Shindo’s sister. He also produced two biopics, The Life of Chikuzan, about a blind singer and player of the shamisen, a Japanese stringed instrument, in which Chikuzan Takahashi appeared as himself as an old man, thus introducing the documentary aspect in the artificial construct; and The Strange Story of Oyuki, adapted from the intimate journals of the traveller and novelist Kafu Nagai. During this time he also made Hachi-ko, on a dog’s loyalty to his master even after his death, which was recently made into a commercially successful Hollywood film with Richard Gere in the lead.

Following the success of the iconoclastic Japanese New Wave, Kaneto Shindô kept up his classical film practice by accepting himself as someone coming from a conservative bent of mind. As a result, his later work tackled the theme of ageing and the treatment of the old in Japanese society. A Last Note which concerned three actresses in their 70s and 80s, questions the meaning of being old in 1990s Japan. In Will to Live, a black comedy on the problems of ageing, a daughter with bipolar disorder of an elderly father who has fecal incontinence, played by legendary actor Rentarō Mikuni. Following this, Shindô gave up his hobbies of mahjong, shogi, and baseball at the age of eighty to concentrate on film-making. In 2000, at the age of 88, Shindô filmed By Player, a biography of actor Taiji Tonoyama incorporating aspects of the history of Shindô’s film company, Kindai Eiga Kyokai.

In 2003, when Shindô was 91, revitalized his concerns for atrocities committed by the military, as he directed Owl based on a true story of farmers sent back from Japanese colonies in Manchuria, to unworkable farmland at the end of the Second World War. The entire film was shot on a single set, partly because of Shindô’s mobility problems. The film was entered into the 25th Moscow International Film Festival where Shindô won a special award for his contribution to world cinema.

In 2010, Shindô directed Postcard, a story of middle-aged men drafted for military service at the end of the second world war loosely based on Shindô’s own experiences. Postcard was selected as the Japanese submission for the Academy Award for Best Foreign Language Film, but did not make the January shortlist. Due to failing health, Shindô announced that it would be his last film.

Shindô died of natural causes on May 29, 2012. According to his son Jiro, he was talking in his sleep about new film projects even at the end of his life. He requested that his ashes be scattered on the Sukune island in Mihara where Naked Island was filmed.

Kaneto Shindô’s cinema has been able to create an interpolation of myth with political violence and historical accuracy through the use of the exaggerated aphorism. His cinema uses the classical tropes of dramatic storytelling whilst introducing decentered elements of film practice such as explicitly formal editing and jagged camera movements. His concerns deal with a newness in the classical idea of beauty that revitalize a traditional aesthetic of order to the state of affairs of contemporary times.

This is a text widget, which allows you to add text or HTML to your sidebar. You can use them to display text, links, images, HTML, or a combination of these. Edit them in the Widget section of the Customizer.
%d bloggers like this: